Home visiting is a service delivery strategy that connects expectant parents and parents of young children with a designated support person—typically a trained nurse, social worker, or early childhood specialist. Services are voluntary and provided in the family’s home or at a location of their choice.

Among their many responsibilities, home visitors—

Home visitors are frontline staff from local agencies (Source: Local agencies are usually housed in a central location and serve families in nearby communities. Local agencies are operated by state and local government offices, such as departments of health, human services, or education, as well as schools and school districts, hospitals and health clinics, tribal organizations, nonprofit organizations, and faith-based organizations.)Go to footnote #>2 who work with families in their homes. They are nurses, social workers, early childhood specialists, or paraprofessionals trained to conduct home visits with pregnant women and families with young children. 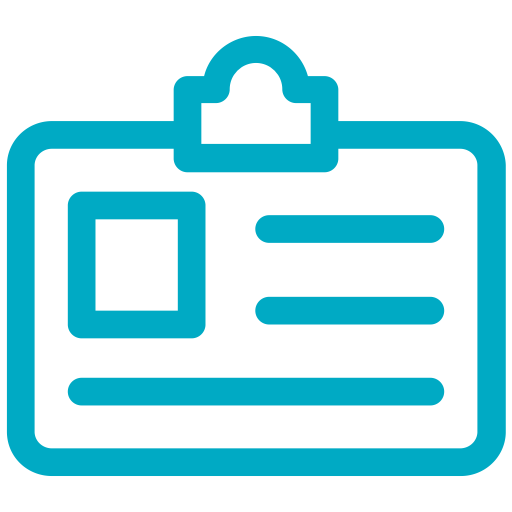 Where Are Home Visiting Programs Located?

Evidence-based home visiting programs operate in all 50 states, the District of Columbia, and 5 U.S. territories. Home visiting is also provided to American Indian and Alaska Native families both on and off reservations, including families in 25 tribal communities that have received funding from the Maternal, Infant, and Early Childhood Home Visiting Program (MIECHV). In 2018, more than 3,000 local agencies delivered evidence-based home visiting.

The map below highlights the presence of evidence-based home visiting programs by county. 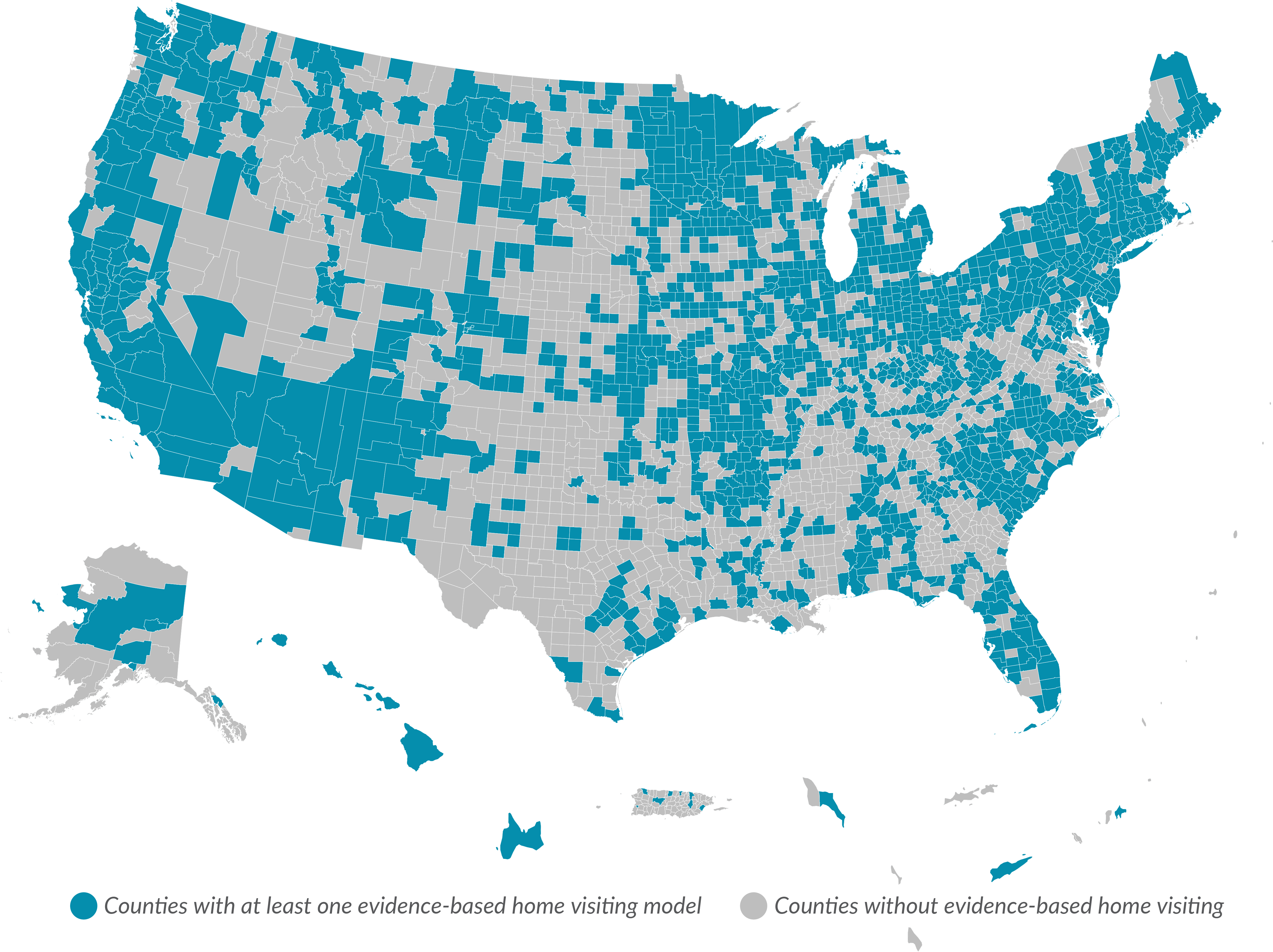 Which States Have the Greatest Reach in Serving Families?

Local agencies may serve families outside the counties in which they operate. This is often the case in rural areas in which families live miles from the local agency and in states with many smaller counties. To better convey programs’ service coverage, rather than agencies’ mailing addresses, we set out to explore where families receive evidence-based home visiting. We collected state- and model-level data about where participating families lived. We also tracked how many zip codes in each state served at least one family to understand the reach—or coverage—of home visiting by state.

The map below reflects our findings, with a higher percentage indicating a greater geographic reach within that state. 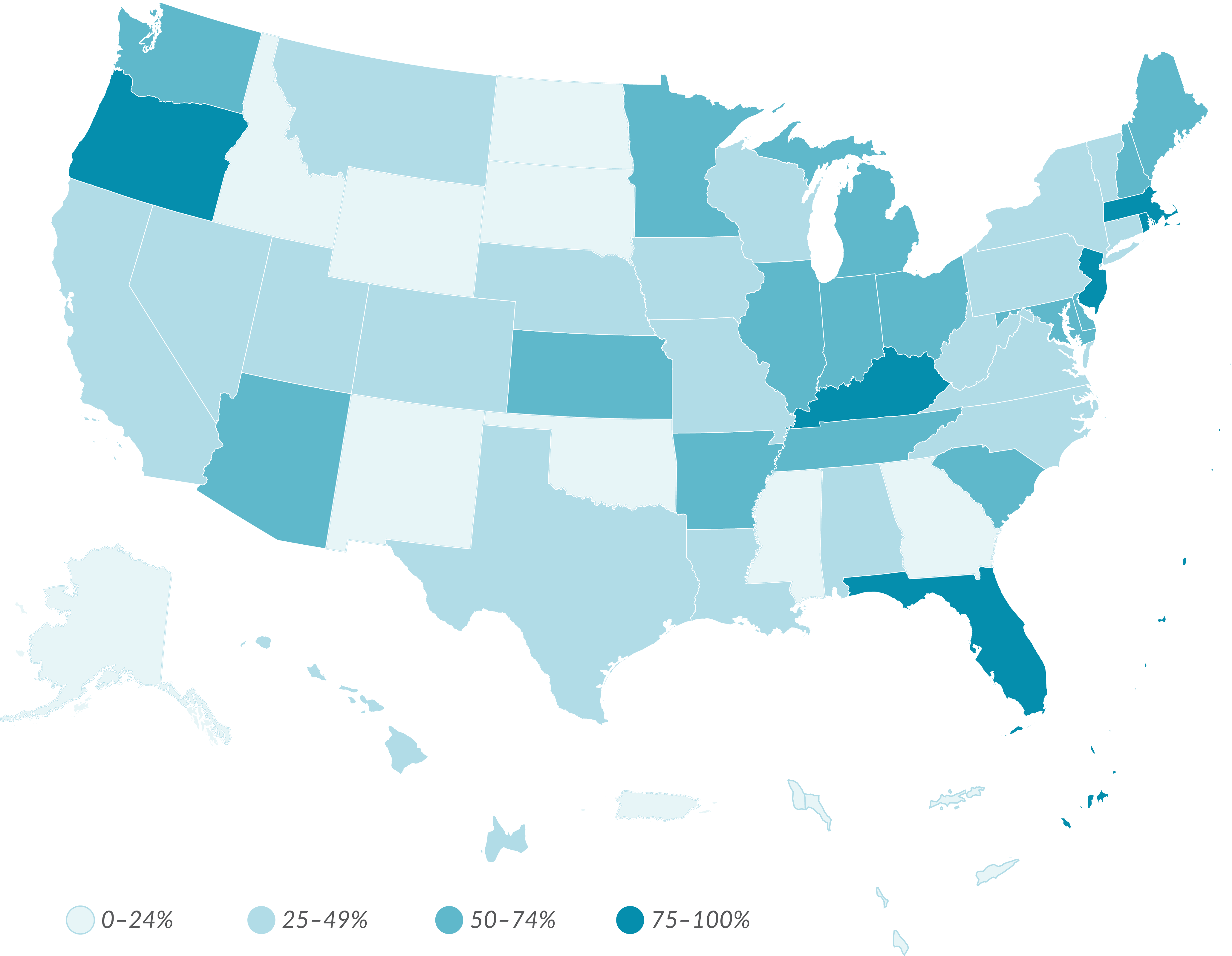 In 2018, 6 states and 1 territory served families in more than 75 percent of their zip codes. Nine states, the District of Columbia, and 3 territories served families in fewer than 25 percent of zip codes. Excluding zip codes with no population, evidence-based home visiting served approximately 47 percent of zip codes across the United States. (Source: Estimates are based on data collected from eight evidence-based model developers and from MIECHV on the zip codes their local agencies serve. The eight models that provided service area data are Child First, Family Connects, HANDS, HFA, HIPPY, Minding the Baby, NFP, and PAT. MIECHV data are used to supplement model developer data, as not all evidence-based models had service area data available. Percentage served in each state was calculated based on the total number of unique zip codes served by home visiting and the total number of zip codes in each state. Zip codes with no population were excluded from the calculation to normalize across states. Population estimates are from the 2017 American Community Survey. Because not all evidence-based models were able to submit zip code service data, the calculated percentages may underrepresent home visiting coverage. Some zip codes not reported by model developers are accounted for in the MIECHV data.)Go to footnote #>4